Team M.E.R.M.O.: The Medicinally Enhanced Rocky Mountain Oysters
It all started on a rainy night in Manitou Springs in the fall of '29 (1929, that is)…let's call it a VERY RAINY NIGHT, much like the rains of 2013…when the torrents carved at the mountainsides and brought Emma Crawford's coffin--who believed she would R.I.P.--down from Red Mountain in Manitou Springs at a such a blistering pace that only a true Manitoid could handle. We shall call it M.E.R.M.O. pace! And if M.E.R.M.O. didn't have to run that avenue 3 times, M.E.R.M.O. would have caught you Emma…with our Oysters! Our Rocky Mountain Oysters! Our Medicinally Enhanced Rocky Mountain Oysters!!! Ergo…The Emma Crawford Coffin Race! 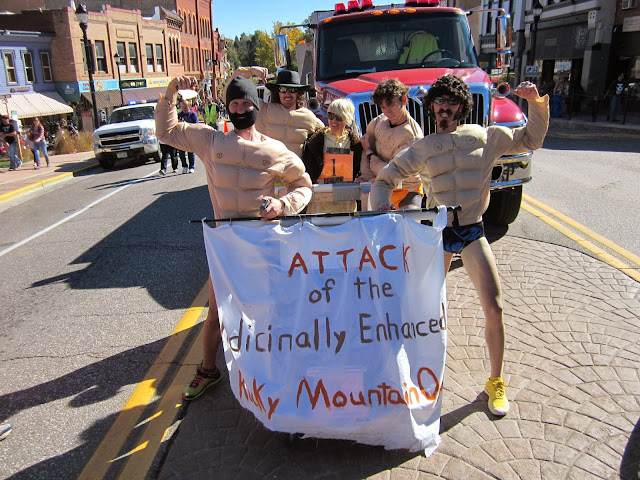 M.E.R.M.O. disguised as Team Colorado…wait, maybe the other way around. Anyway, these four anatomically correct Oyster-looking creatures pushed a coffin lovingly named "Oyster" up Manitou Ave faster than Emma could have ever imagined. We even had our very own 21st Century Emma inside! She was alive, of course, because pushing a cadaver around town in a speedy coffin is frowned upon in Manitou Springs. Matt Carpenter, city councilman, would NOT approve.

But first, it started with the celebratory parade of coffins where all the ladies were checking out our sugar lumps…oysters, our oysters! There were ghouls, Waldos and Oysters abundant…oh, and this little pig. 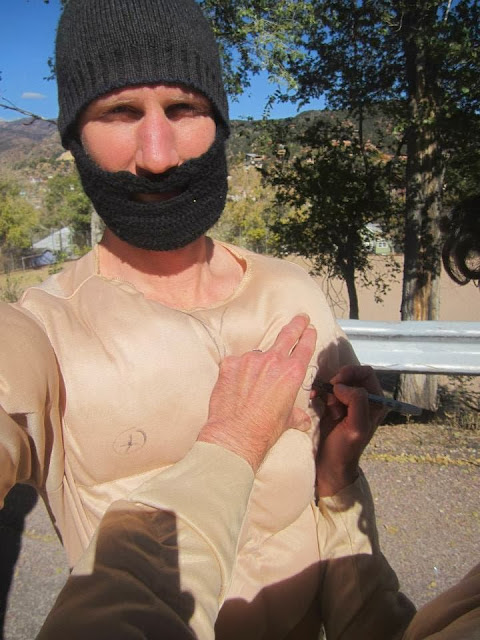 Nipples don't magically appear…they have to be drawn on... 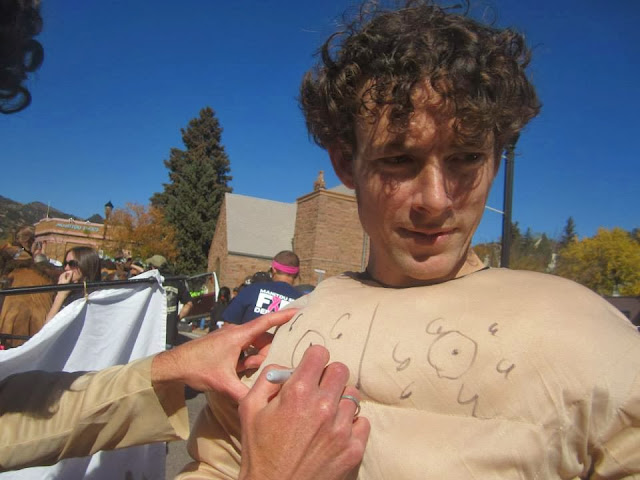 …and so does chest hair… 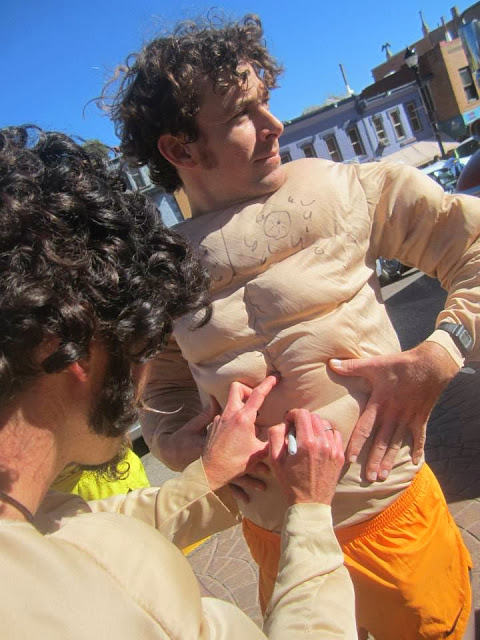 …and that hair that grows up your stomach that connects the rest of the hair on your body!


Round 1: M.E.R.M.O. was given the poll position with race number #1 (foreshadowing, perhaps?) and raced the Manitou Springs Fire Dept. in the ~180 meters up Manitou Ave.  Fire Dept. teams are always strong contenders, probably because their jobs here in Colorado are extremely busy, especially in the last two years, keeping them in tip-top coffin racing shape. The Oysters pulled out a convincing victory but had to wait for the other 48 teams to compete before knowing if they would qualify for the finals with one of the top 4 fastest times. And so it turned into a waiting game. 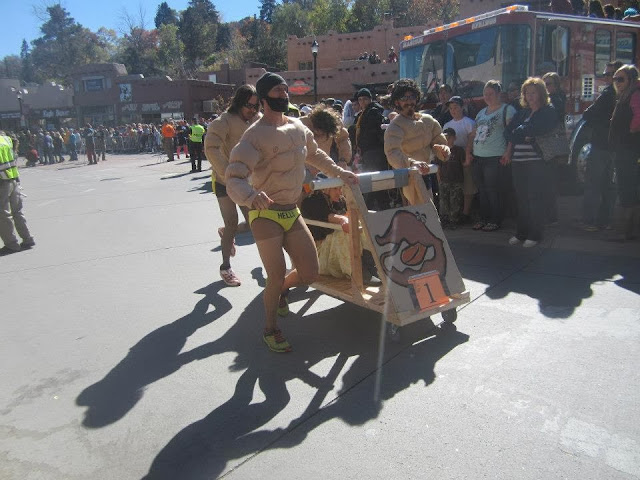 Round 2: After 50 teams had competed, M.E.R.M.O. was informed that our time wasn't recorded and we, along with the Manitou Springs Fire Dept., had to complete another run. We ran so fast, they weren't even able to to get a time on us! After much searching, the Manitou Spring Fire Dept. were all able to get back to the line and we ran that avenue again. The  Fire Dept. had lost control and crashed into the barrier while team M.E.R.M.O. shucked a good one and qualified for the finals with one of the 4 fastest times of the day, 23.72.

Round 3: With only 3 minutes of recovery (Oysters need recovery!) M.E.R.M.O. had to toe (or oyster, rather) the line again in one of two finals races. With toasted oysters, M.E.R.M.O. put forth a valiant effort, however, left driver M.E.R.M.O. connects foot to Oyster shell and goes down. Leaving M.E.R.M.O. to finish in the Blue Angels Missing Man Formation. It's a shuckin' shame!

M.E.R.M.O. goes down!
M.E.R.M.O. earned a 4th finish behind some very strong, but not nearly as well dressed, teams: 1st - Ghoul's Gulch, 2nd - Catamount Fire Dept., 3rd - Thriller. Congrats to all the coffin racers, it was a shuckin' amazing day!

(historical Note: M.E.R.M.O. is the only team to run 3 times at the Emma Crawford Coffin Race).

No, Emma would not have rolled over in her grave if she saw this. She would have, however, enjoy a fast ride up Manitou Ave! 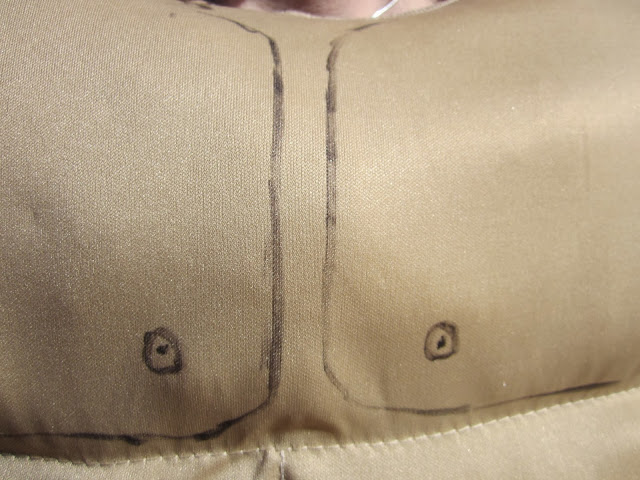 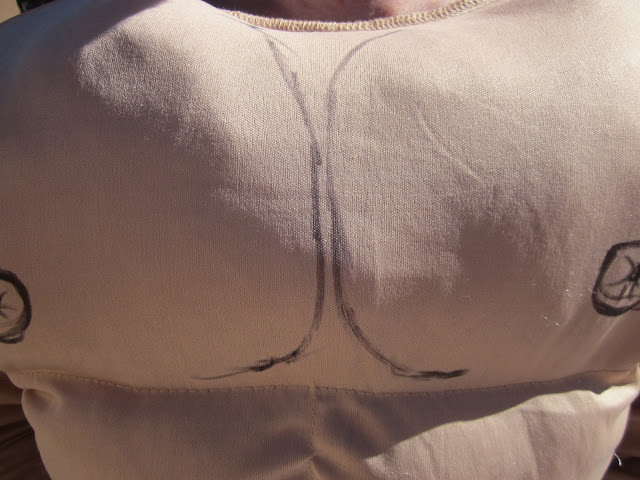 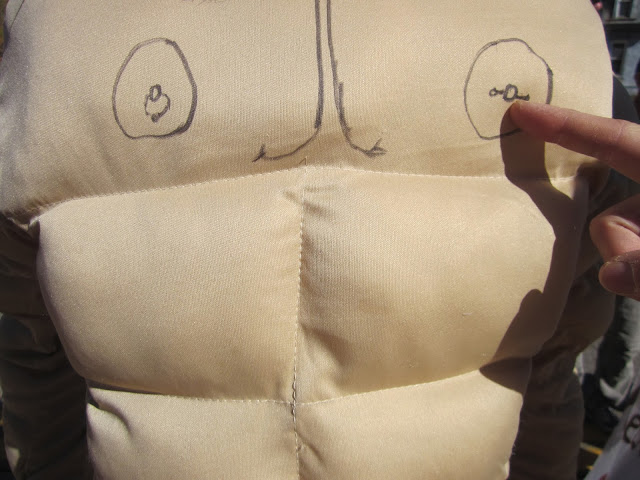 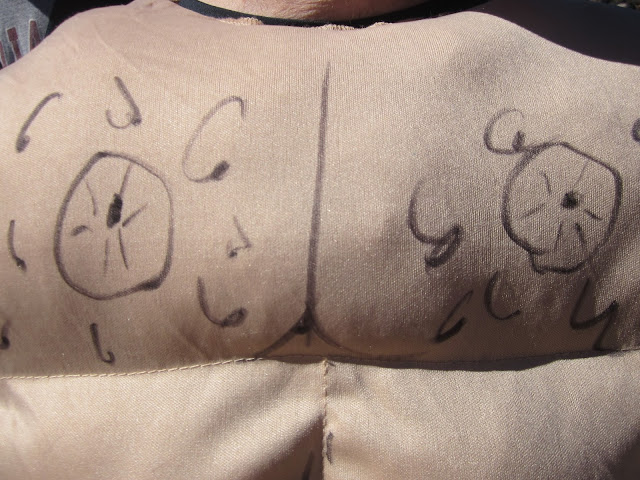 Oh, yes we do! Select PT, employer of our very own Gute, made sure our oysters were nice and limber before the races and tended to our badly toasted Rocky Mountain Oysters afterwards…because oysters need a lot of physical therapy. Select PT (Melissa, Gute and Shelly) can be found in downtown Colorado Springs and can poke, prod and tape up YOUR oysters, too! 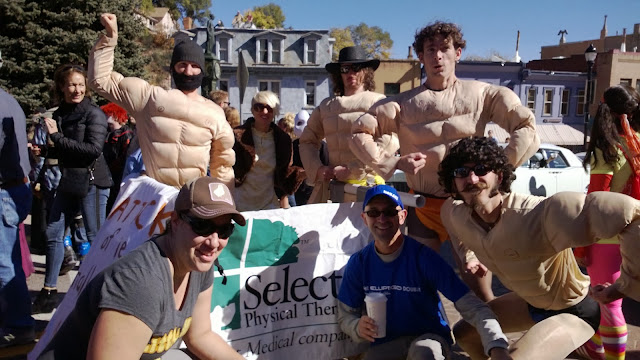 Thanks for the support! Actually, left rear oyster needed some support of the jock kind. 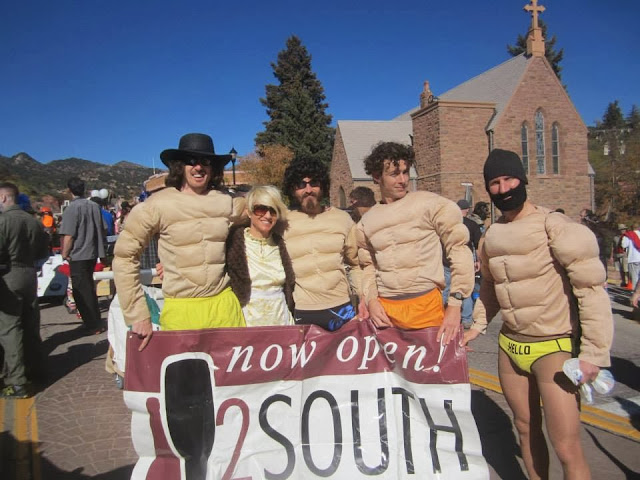 *No Oysters were harmed in the pushing of this coffin…well, maybe one but he has since recovered. 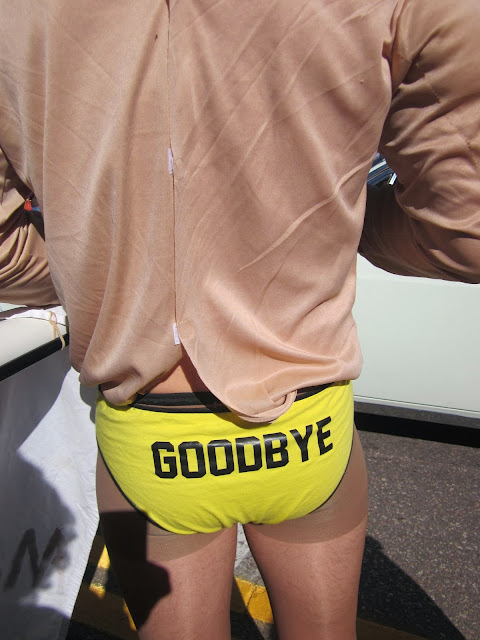 "All I have to say is we were shuckin' fast on those first two runs!"
-Right front driver
Posted by Peter at 7:45 AM

Email ThisBlogThis!Share to TwitterShare to FacebookShare to Pinterest
Labels: Shenanigans