On the weekend of the day that will live in infamy (December 7th, that is, if you are history deficient) Team Colorado took to the trails, the roads and the snow to show off their awesome swants.

She does it again! Michele "bomb 'chele" Yates captures another major ultra running title with perhaps the most competitive and highest paying race in the country, The North Face 50 Endurance Run in the Golden Gate National Recreation Area (well, aside from that other $10,000 prize purse at Run Rabbit Run 100 in Steamboat Springs...which she also won).

The Team Colorado train of Megan Kimmel and Michele took out the women's race and kept it honest, mixing up the top three positions with eventual 2nd place finisher, Magdalena Boulet (there might be a Lewy in there somewhere?), but Michele was determined to keep the role as the engine, leading early and just pushing the pace up front. After a lot of details that have been left out here, Michele eventually crossed under the big red arch in a winning time of 7:21:51 and was $10,000 happier!

Megan felt the pull of the ultra running demons but was able to finish in 10th place in 8:13:28.

On the men's side, Team Colorado's Alex "Axel" Nichols took on TNF50 again after a 5th place finish in the very confusing 2012 race and a mid-race sprained ankle in 2011 while leading. The ultra running demons caught Axel in their tractor beam early when an old injury reared its ugly head and he was forced to call it a day at about 17 miles.

Sage Canaday was purported to have been at the starting line, however, we are not sure if even started the race. Rumor has it that he is still lost from his run from Moab to Boulder after the Moab Trail Marathon (he also had the flu).

Rickey "Heavenly" Gates was mixing it up in the top 10 early, but said he was steamrolled by the ultra running demons. Last year he was subjected to a DNF and soaked his feet in some nice Belgian chocolate, this year, he just felt flat. Rickey finished in 7:35:04 for 26th place.

Flagstaffer Rob Krar turns out another amazing ultra performance with his win at TNF50 and raises the roof once again. Have a beer on Team Colorado at Mother Road Brewing Co. in Flagstaff (we'll pay you back!). Friend of Team Colorado and Colorado College grad, Dan Kraft, one-upped his college teammate, Axel Nichols, with a 4th placed finish (6:35:56).

It all started in the Norway in the 1850's when some Norwegian brothers named Nils and Bjorn, or something to that effect, produced very warm and highly decorative sweaters to keep from turning into a popsicle in the cold northern winter climate and to look like a giant snowflake in the process. One early morning, after a long night of drinking Aquavit, Nils hears a knock on the door and quickly grabs whatever he can find and answers the door. The visitor says "Hallo, hvorfor har du på deg en genser på nedre halved?" which loosely translates to "Hi, why are you wearing a sweater on your bottom half?"

"Uff da!" Nils replied...and thus the swants were born and so was the Ugly Sweater Run, a 5k in Monument Valley Park, Colorado Springs to benefit the Cerebral Palsy Association of Colorado Springs.

The race started along the mighty (mighty nasty, that is) Monument Valley Creek in Monument Valley Park, Colorado Springs, CO, at a whopping 5 degrees above zero! Luckily, ugly sweaters and sexy swants were donned to keep the runners cozy.

And the race was started with Santa's doppleganger yelling "Ho, Ho, GO!"

Peter "The Prez" Maksimow, aka Swantsy Pants, out-uglied everyone in the race to cross the line first in 17:58. He also turned a year older, so he is 27 years old in Kenyan years. The wool and alpaca blend in his swants kept him from freezing his...well, you know.

Amy "Chef l'équipe" Perez wore her swants and ugly sweater enroute to 8th place female but, mysteriously, we had a photo malfunction and are unable to find her image.

Justin Ricks gets frosty at the Rock Canyon Half Marathon in his old stomping ground of Pueblo, CO. You can call him Frosty Ricks!

With bitterly cold conditions, enough for his mild mannered beard to turn into a lumberjack's beard, Justin didn't need water (he just ate the ice from his facial hair) en route to a win in a time of  1:18:46. He holds the CR at this race with a 1:09:34 set back in 2009.

Whatever you celebrate, do it with beer. 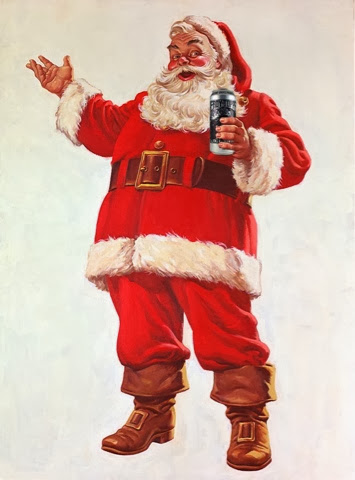 Happy Holidays from your friends at Team Colorado!
Posted by Peter at 6:49 PM 1 comment:

There were turkeys with the trots in downtown LA! Peter "The Prez" Maksimow ran the Turkey Trot Los Angeles 5k/10k double. He started with the appetizer dish, running the 5k at 7:45am, and managed to outrun the ghetto bird to place 3rd in 15:47.

Then onto the main course with the 10k at 8:30am. Thinking that going back for seconds would leave him stuffed, The Prez paced himself and slowly gobbled up the competition with the help of fellow college turkey (teammate, actually, but he is a turkey) and Mexican National Steeplechase Champion, Luis "Lu-Dogg" Ibarra, in the 10k and garnishes the win in 34:06. He then pigged out on the two pies that he won for his performances. You could say he felt very fowl after dessert but he was thankful for all the caloric expenditure.