Team Colorado atop the podium at the Trans Rockies Run, Pikes Peak Ascent and Marathon

It was a busy week in mountain running for Team Colorado... 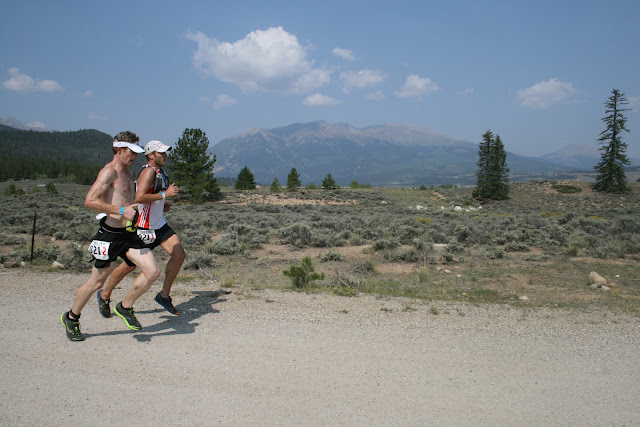 August 14-19: Justin Ricks teamed up with Jim Rebenack for the 6-day, 20,000 feet of elevation gain, 120-mile Gore-Tex Trans Rockies Run, which started in Buena Vista and ended in Beaver Creek, CO. Ricks and Rebenack were battling it out all week long with a strong Team Run Flagstaff and Team Salomon, securing a very solid 2nd place overall in the open men team category with a combined time of 16 hrs 21 min 2 sec. Even more impressive was when Rebenack, after the 6 days of racing, found out that the foot injury he suffered during day one of the race turned out to be a broken bone! 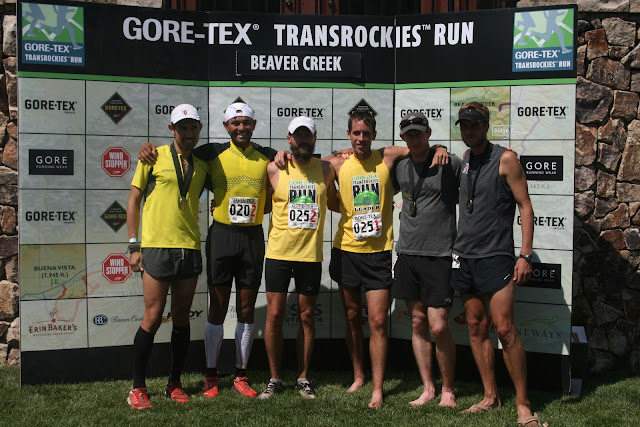 August 18: The Pikes Peak Ascent saw four Team Colorado runners toe the line on Saturday. Rickey Gates, the Nomadic runner, moved his way up the field in the second half of the race to place 2nd OA with a time of 2:15:42 behind eventual race winner, Jason Delaney of Golden, CO. 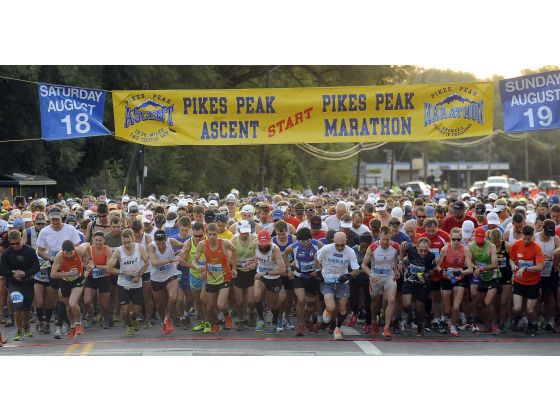 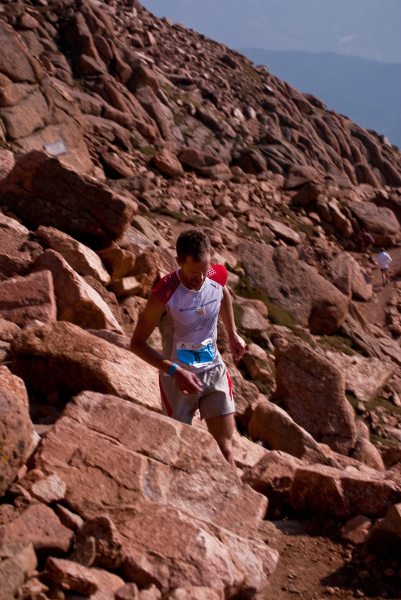 Gates approaching the finish line atop the 14,115 ft summit of Pikes Peak 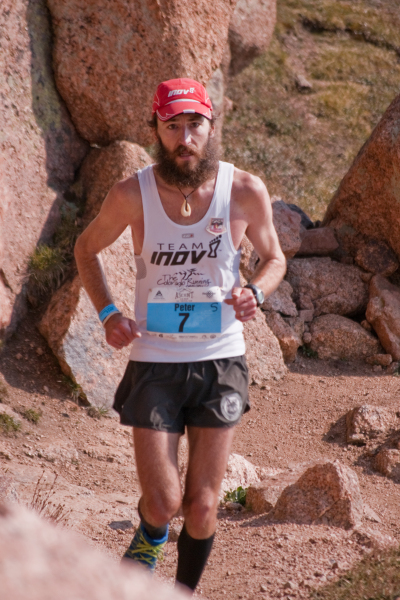 Maksimow finishes in the number on his bib

August 19: In the Pikes Peak Marathon Team Colorado's Alex Nichols took on the tough and grueling race, gaining then losing 7,815 vertical feet, to face some of the best mountain and trail runners in the world. After having the lead a few miles into the race, he reached the top in 2nd behind Killian Jornet of Spain in 2:22:51 and held off the fast charging 2011 World Mountain Running Champion Max King to finish in 2nd place OA in a time of 3:47:25. Congratulations to Alex on an impressive performance! 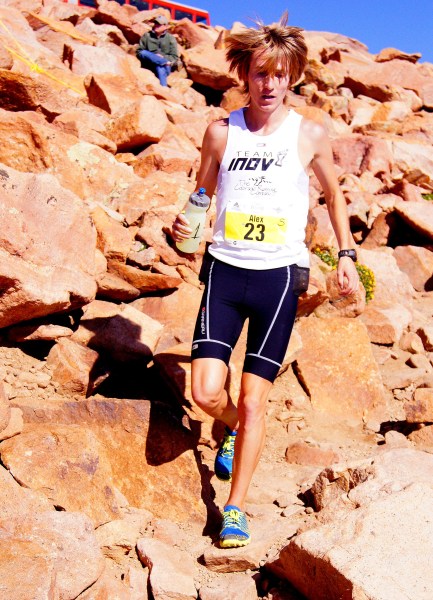 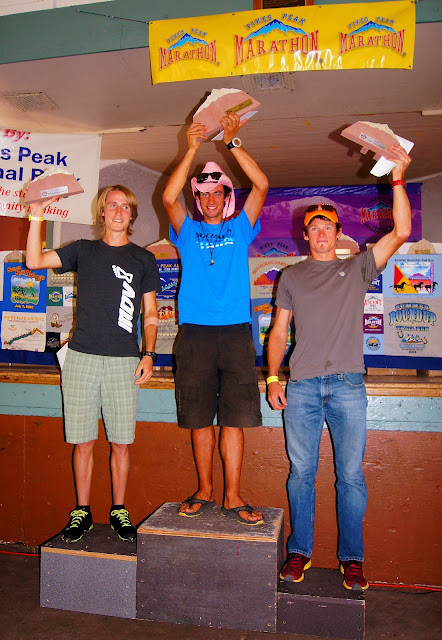 (L to R) Nichols, Jornet, King on the podium of the PPM

Photos courtesy of PikesPeakSports.us
Posted by Peter at 11:31 PM No comments: 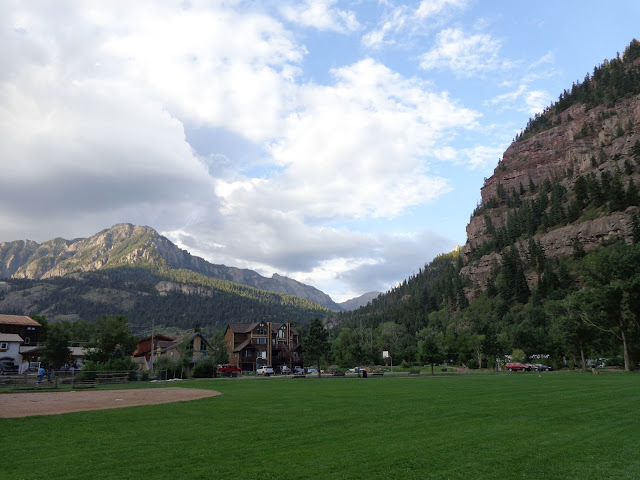 The surrounding mountains of Ouray

This year the Mt. Sneffel's Half Marathon, held on August 11th, from the picturesque town of Ouray to the town of Ridgeway, served as the USATF Colorado State Half Marathon Championships. After battling injury and a slow recovery, Team Colorado's Peter Maksimow tested his legs at the mostly dirt, county roads course that started at 7,700 feet in Ouray and finished at 7,000 in Ridgeway. Maksimow finished 8th in 1:16:14 amongst a strong field of contenders. 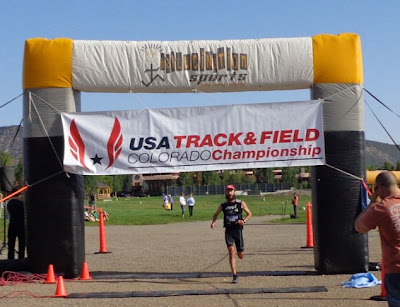 Maksimow crossing the line in 8th

Simon Gutierrez accumulated his 11th win at the 9 mile La Luz Trail Run in the Sandia Mountains in Albuquerque, NM on August 5th.

Results
Posted by Peter at 9:53 PM No comments:

It was a fast day of racing on July 28th at the 2012 Speed Goat 50k at Snow Bird Ski Resort in Utah, as six men went under the old course record; not to mention, an interesting twist in the prize money disbursement and course record.

Killian was kept in the results for the International Skyrunning Federation points standings, but Gates was credited with the course record, which carried another $500 in prize money. Gates also garnered the prime of $1,000 for the first runner to the top, and took home a hefty $4,000 pay day. Basically, beers are on him for the next year!

Justin Ricks of Team Colorado placed 11th overall in a time of 6:06:35, helping him establish himself as a top ultra runner in Colorado.

Results and write up.