Simon Gutierrez (lovingly known to his Team Colorado teammates as "Gute") got his fill of Thanksgiving races in the past few weeks.

On November 17th, Gute participated in the Pikes Peak Road Runners Turkey Trot Predict, where he came across the line in 16:37.15, only 2.85 seconds off his predicted time of 16:40, thus winning a big-ass frozen turkey.

In his own words, Gute gives us his race review:

I knocked off another race from my "got 2 run it" list.

With great prize money, wonderful weather and many of the top Colorado runners showing up for a flat fast race at 5000 ft sea level, I was expecting to cruise 20:20, win the masters money and pumpkin pie for my age division.

Sometimes you show up for your "A" game and all you got in the 1st mile is noodle legs....hitting the mile in 5.02 feeling like it was 4.50 is not a good feeling especially when your in 20th place and and 2nd overall master....next mile was when you ask yourself if racing is worth it...2 miles 10:16...3rd mile 15.42. But I had recovered enough to enjoy being slightly ahead of master ace Art Siemers...feeling like I could at least finish strong, I did not expect the calf cramping with 400 meters to go...something that I have dealt with, especially on hard flat pavement over the past 25 years...

21:00 second master and like 26th overall may seem like a disaster but in reality It was a lot of fun, I still got a 100 dollar prize and being in different old guy age groups, Art and I each got pie... 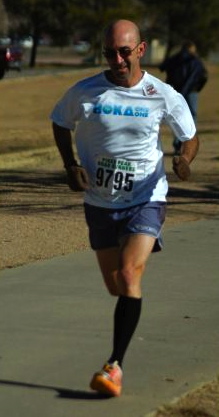 Next up for Gute is XC Nationals in Lexington, Kentucky on December 8th after a 2 mile tune up at the Nielsen Challenge on the December 1st.

Another Incline Beer Mile and the last Fall Series Race

The second edition of the Incline Beer Mile took place on Saturday, November 10th. The small field of 6 had to endure the incline masses, the raining of snow pellets and foamy beer (considering each participant had to carry their own beer with them).


Peter Maksimow defended his title in a pedestrian 30:56, with JT (Jon Teshier) claiming the second spot and Liz Sanchez of Denver close behind him in 3rd OA, setting a new women's CR in 42:58.

The next day at the Pikes Peak Road Runners Fall Series race #4, Justin Ricks come off a 2nd place at the USATF Trail Marathon Championship a week ago to place 2nd OA in 47:06 at the 7.3 mile trail race at Palmer Park in Colorado Springs, CO. He solidified his 2nd place in the series behind overall and series winner, Robby Young.


Peter Maksimow finished 6th OA in 49:56 and pretty much just stank it up, losing positions in the overall series. Alex  "Axel" Nichols just put in an easy effort to keep an injury at bay in his preparation for the North Face 50 Mile in a few weeks.

Results
Write up on PikesPeakSports.us
Posted by Peter at 4:17 PM No comments:

Justin Ricks places 2nd at the slick-rock, rope-climbing, shit-show which was the Moab Marathon in 3:14:40.

The Moab Trail Marathon, which must have been inspired by PPRR's Fall Series, played host to the 2012 USATF National Trail Marathon Championships. Team Colorado's Justin Ricks ran a conservative race to finish in 2nd place. "I knew it was going to be a challenging course and knew an easier start would play in my favor once I reached the more technical parts of the course."

Justin, who moved into third place around mile 10, started out in 12th place. "I felt great all day and had a lot of fun out on the trails! Considering the depth of the elite field, I am very happy with a second place finish at a national championship race."