On the week of the American Federal holiday, Columbus Day, named for someone that didn't actually go by that name when he was alive, we celebrate the real adventurers...because discovering something after it has already been discovered is like walking into someone else's house and telling them "I LIVE HERE NOW!!!"

LIMONE SKYRUNNING EXTREME - SKYRUNNING FINALE
In the finale of the 2013 Skyrunning World Series in Limone, Italy (and all along we thought that US Baseball had that title) Axel Nichols and Stevie "Sunshine" Kremer were given Limone...and so they made Lemonade! They then added their winnings to that and came out with a Bellini-esque concoction, courtesy of their new friend Valdo...but let's not put the cart before the horse.


The Limone Extreme race took place in the small mountain-side town of Limone along the picturesque Lake Garda and consisted of over 6,000 feet of climbing over a 23.5k distance. Although, it must have seemed like so much longer on such a steep climb as this. (Note: Do not watch this video if you get motion sickness--or just brace yourself and have a barf bag handy, the helicopter views are a doozie!)


Axel went into the final race of the series in 4th place and, with a 8th place performance at Limone Extreme, he secured his name (spell it correctly, A-X-E-L) in the annals of the International Skyrunning Federation with a podium finish of 3rd (226.2 points).


Axel participated in the following Skyrunning World Series races: Zagama Aizkorri (well, he started that one, anyway), Mont Blanc Marathon (7th), Pikes Peak Marathon (2nd) and Limone Extreme (8th). Even though Axel didn't have as many points as 5th place series finisher, Jokin Lizeaga Mitxelena (not a made up name), he secured the 3rd place series rank because the top 3 scores were tallied to determine the overall standings. Best of three!!!

Axel then drank his prize with a little Limone.


Stevie went over to Italy sitting in 2nd place in the Skyrunning World Series rankings, down by only by a mere 10 points behind Emelie Forsberg, and worked her magic on that craggy mountain.
With a big will and a small lump (on her lower back), Stevie held 2nd place on the steep climb...then she made her move on the technical downhill section, won the race and put more seven minutes on the next finisher, Antonella Confortola (2:53:58). Forsberg finished 3rd in 2:54:54.


Stevie was running so fast that she almost lost her drawers (don't believe us, check out 11:45 into the video by sporrtdimontagna). Maybe it was due to her friend, Lumpy?

With her time of 2:46:13, Stevie set a new course record and with that performance she has been anointed with a new holiday: Stevie Kremer Day! She celebrated with her friend Valdo.

Glenn "Pulling a GR" Randall took on the Chicago Marathon last weekend, where the winning time was a scorching 2:03:45 by Kenyan Dennis Kimetto. Wow! We are not sure he even attempted to Pull a GR with that kind of speed. 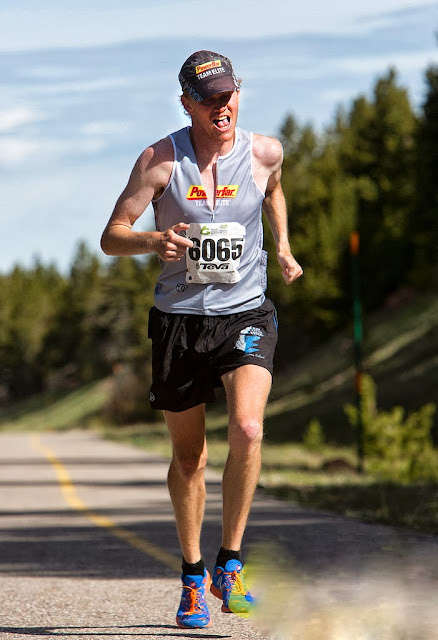 Randall, who has been tied up in Physics midterms, told us he was fairly-to-somewhat confident with his preparation for Chicago. "I'm going in with roughly the same confidence I went with into a midterm last Thursday. Pre-midterm grade in the class is apparently 139%, and I'm very confident that I got in the A range for the exam. So, I figure if it worked at Pikes Peak (in 2010) and it worked on that exam, maybe it'll work here?"

It seemed to work! He finished in 32nd place overall with a very respectable 2:21:32. 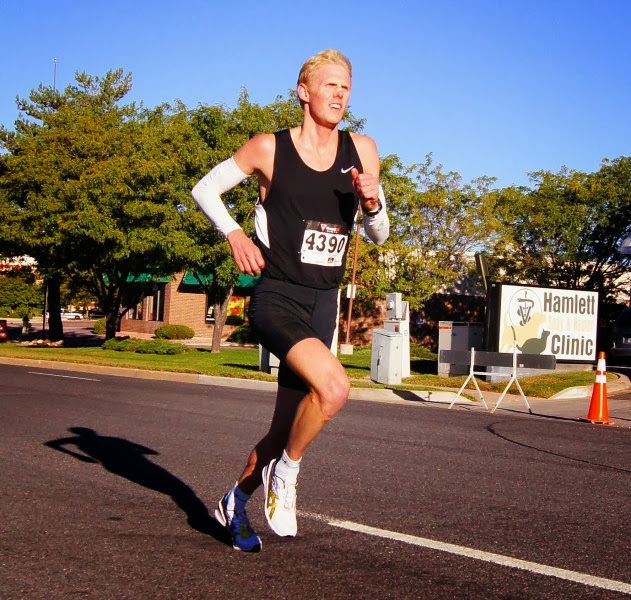 One of our newest additions to Team Colorado, James "Mr." Burns (Colorado Springs, CO), takes on the marathon distance in his sophomore showing.

Mr. Burns headed out to his birth state to run the Steamtown Marathon in Scranton, PA (as well as to hang out with the similarly last-named Matt Byrne and the rest of the cast of The Office). He managed a PR and 3rd place overall, running 2:26:38.

He was plotting it all along!

MINE TO MINE CHALLENGE 9K

Simon "Gute" Gutierrez was back to his old self (no pun intended) when he again ran the Mine to Mine 9k Challenge in Cripple Creek, CO. Last year Gute struck gold in the Mine to Mine Challenge and created a gold tooth out of the gold nugget he won. He repeated his performance again this year with a 3rd place finish in a time of 29:47.

Gute gave us the lowdown on the race:

"The weather was perfect for a gold mining expedition....two young gunning prospectors went out at 4:07 (Joe Gay) and 4:27 (Richard Medina). I took it careful not to hurt my old hamstrings at 4:46 (especially thinking old sexy had pulled his...Gerald)...by 2 miles Joe and Richard were beyond eye sight and I was happy to not see any one behind me. So, as a wise old prospector, I did not try to get greedy and wish for more gold, instead I relaxed (15:52 through 5km), enjoyed the run and was surprised to run a minute faster than last year. Now I officially have 2 gold nuggets!! Saving up for a rainy day or some new gold teeth..."