Ultra Race of Champions: A Sufferfest 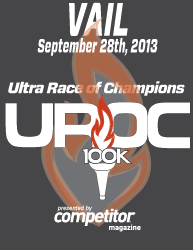 Last weekend was the Ultra Race of Champions 100k, a self-described "World Championship of Ultra running", also known as UROC, because, much like ultra running, saying Ultra Race of Champions over and over gets very tiresome. After hearing many of the same utterings from the competitors, it should have been called the "Sufferfest of Ultra running." With temperatures in the high-teens at the start, snow as deep as a short person's waist at the peak of some mountain-top climbs, Krupicka doppelgängers abundant, 10 miles of pavement (Killian definitely wanted to shoot himself) and an additional 4 miles tacked onto the already long 100k of running (that's over 6 more K's to you Euros!), everyone suffered nicely.

Our Team Colorado contingent was present: Michele "bomb 'chele" Yates, Sage Canaday and Rickey "Heavenly" Gates, along with Spaniard Kilian Burgada Jornet (we are not really sure if that is a middle name or a first-last name), Flaggers Rob Krar and Jason Wolfe, Swede Emile Forsberg, Bendite Stephanie Howe, some guy from Jones, North Dakota, Colorado's own Kerri Bruxvoort, Francesca Canepa from Italia--probably a wine drinker, Team Inov-8 master's star Gary Gellin (he was Gellin'), the whole Salomon contingent and others that hoped to make their mark on this course.
The Prez and first lady were present to cheer on and crew for our fellow athletes and a few things became apparent: it can get really, really cold in Colorado (sh'yeah...we're in the Rockies!); misery does NOT love company; crewing is hard work--even if you are drinking beer; snow can be very deep...especially if you are very short; no one wants to drink beer after over 10 hours of racing...booo! That is what happens when you eat a gallon of gel and gelatinized gels. Very understandable.

Michele Yates took the plunge, considering she ran a 100-miler two weeks ago. Don't ever tell her she can't do something, because she will prove you wrong (while dropping a bomb on you!). We asked her a few questions about the race.


Team Colorado: Michele, congrats on 169 miles of racing in a two week period (Dean Karnazes has nothing on you!). We heard a lot of (most) people say that UROC was one of the most difficult races they had ever done, do you think so?

Michele: UROC was a very challenging race, mostly due to the weather conditions. We experienced some dangerous, snowy conditions on one of the peaks, mud, ice, flooding, more snow...but all in all, that is what it's ALL about, right? ULTRA-going beyond others or beyond due limit...  The course tested our limits :) It had technical trail downhills, uphills, easy road, bike path..you name it!

Team Colorado: How bad was the snow on the second big climb? You said you were waist deep (but you did describe yourself as "short"). Did that affect the rest of the race?

Michele: The snow wasn't too bad, it was just the wind that accompanied it! They said the temps up top reported below zero with gusts up to 30mph..and I believe it! There were some ledges that weren't runable..you seriously could have easily slid right down the mountain..that all made it fun! I think the only thing that affected my race was running 103 miles 2 weeks ago..otherwise, I was happy to be out there!

Team Colorado: I don't recall hearing one negative thing from you, everyone else was not as positive as you (did you eat some pop tarts or something)…did that help you get through the race?

Michele: Thanks, I always try to stay positive..and again, I am happy to be out there and blessed I have the ability to do so!
Team Colorado: You went from 2nd at the beginning of the race to 4th in the middle back up to 3rd at the finish, how was that getting passed and passing in such a tight race?

Michele: Hmm, well...my legs were not happy to be out racing again so soon, however..the rest of me was :) So taking that into consideration...I had to take care of myself nutritionally and be more conservative at the beginning of the race...pretty much up to the last 15 miles. I didn't expect to be in second at one point, so again..I stayed conservative..then towards the end (after one REALLY rough low point) I hammered down! I knew I had to be realistic coming into this race. I was not going to be "fresh" with "spunk" in my legs..but I didn't ever count myself out of first place either. ..this is an ultra- anything can happen and a lot does!
Team Colorado: Thank you for giving us a dance! It was like you were turning a ultra into a discotech!

That is not a literal bomb, if anyone from Homeland Security is reading this...oh, never mind, you guys are shut down! After swapping positions, Michele moved into 3rd place and secured her position, finishing in a time of 12:46:24. 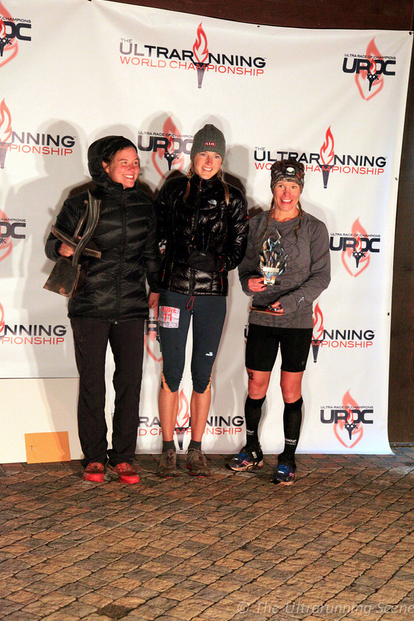 Michele literally crossed the finish line and had to run over to the awards ceremony that was already in progress...way to go "Ultra World Championship".

Rickey Gates started off in a great position at the beginning of the race, in about 7th place through the first aid station, but the course and weather seemed to take its toll on him. Cold weather can do that to a person. Though, sometimes it was hot...frigidly-hot. When the wind blew or if the runners happened to find themselves in a crotch-deep snow, it was really cold. At times of no wind and when the sun was blaring...all you wanted to do was take off your clothes.

We are still not sure if he was aware that he ran the last 40 miles in two different shoes. He started off with two red Salomon S-Lab Sense 2 and finished with one blue and one yellow Sense Mantra. Make sense?


Rickey takes the time to play the role of Kris Kringle and hand out candy to the kids in Minturn.

An obvious sign Rickey was struggling was when he texted his mom in the last 10 miles and told her he was suffering badly and needed Miller Lite...you know you are struggling when you request Miller Light! It has the same molecular structure as water, so maybe he just wanted to rehydrate. Although, when offered a (real) beer with 100 meters to go in the race, Rickey turned it down stating, "I'll puke if drink that right now."


Sage Canaday took the race out Sage Canaday style--honest. Having already had a phenomenal ultra year, Sage planned on continuing his streak with an "Ultra World Championship" win. After taking a prime at the top of the first climb, Sage swapped the lead several times with the front runners, always within striking distance.


Word was that Sage took the lead at the halfway point (since the race was approximately 4 miles long). Everyone loves an honest person!


The pace was fast and the weather was exhausting. Sage soon found himself struggling with some of the other superstars. He later said, "My stomach felt so bad all day and after the race I had to go straight back to my hotel room and pass out...I couldn't muster up the energy to have a single sip of beer the whole night after the race (I know, pathetic!)."

At Minturn, Sage attempted to eat some potato chips which went from his hand to his mouth straight to the ground. He then proceeded to apologized for littering. He was shaking and complaining of stomach issues. "All I want to do is finish", were his main words at Minturn--10 miles to go. He doesn't remember much of the conversations with people beyond this point so we can say he said anything.

Read Sage's write up on his blog.

Friends and crew recipients of Team Colorado, Stephanie Howe (The North Face) and Gary Gellin (Inov-8), both ran superbly, placing 2nd and 12th, respectively. Beer and Bloks were offered at every aid station.