Team Colorado took advantage of the long weekend and labored harder than usual on Labor Day.

In foreign affairs, Tommy "One Man Wolf Pack" Manning stays true to his nickname and takes the win at the 2013 World Masters Mountain Running Association Championship in Janské Lázně, Czech Republic in a time of 37:44 for the 8.6K course. Tommy is not that old, you may say. Well, according to the Kenyan calendar he is 37 years old and in European thinking the masters category starts at 35 years old. So, if you combine those two ideologies, Tommy is thus a masters runner and therefore a World Champion! If you have any complaints, direct them to the Europeans, they make the rules.

We asked Tommy about this and he said, "I don't know why the masters category starts at 35 in Europe, but because it does, I thought I would go over and give the masters category a shot while I still feel good (I actually wanted to go to world masters in 2011, the year I turned 35, but I earned a spot on the USMRT when I didn't expect to)."


Tommy told us a bit about the race in Janské Lázně, Czech Republic.

I love small mountain towns in Europe. There is hardly anybody there, the scenery is beautiful, there is no traffic, lots of dogs, clean air, etc. I love the small cottages in the villages, the absence of Starbucks or anything Vail-esque, the lack of many tourists, and that the locals are so nice to tourists.

The race started at the bottom of a ski slope. The climb to the top was a little over 5km, so we ran a loop around town first. The loop had a steep climb up a to a ridge, ran on singletrack across the ridge for at least a kilometer, then circled back with a descent towards the start. At the bottom of the gondola, we turned up and started climbing. That's where the race really started. It was 5+km of climbing and the next 2km were brutal. I ran a 6:07 km up the super steep part, while my last 3 km were 4:36, 4:00, and 4:20.


Most importantly, did you try the local beer?


I had a beer the first night I got in. I had a few beers actually. I don't know what they were, but I liked them.  I also drank beer the night before the race.

You heard it, Tommy drank a lot of beer! Fuel of champions!

PikesPeakSports interview with the One Man Wolf Pack.
Results

Stevie "Sunshine" Kremer, the newest addition to Team Colorado, takes the victory and breaks the CR at the Breck Crest Mountain Marathon in 3:34:14 in ye ol' fair city of Breckenridge, CO, with a smile on her face and pearls in her ears.

At the Blue Moon Trail Run 5K and 10K in Ute Valley Park, Neil "Big McD" wins the 12K race! After leading both the 5K and 10K race fields, Big McD was "feeling fresh" and "so clean"as he gives a low-five to an unidentified spectator on the course, before an innocent volunteer sent him right instead of left and he found himself in a place that looked a lot like Kansas. He claims to have seen Toto. 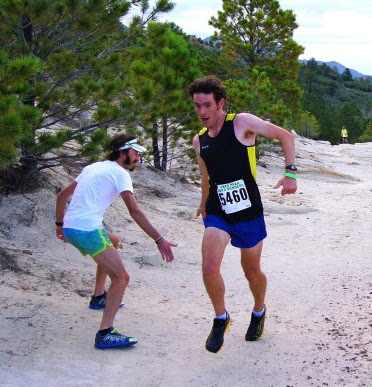 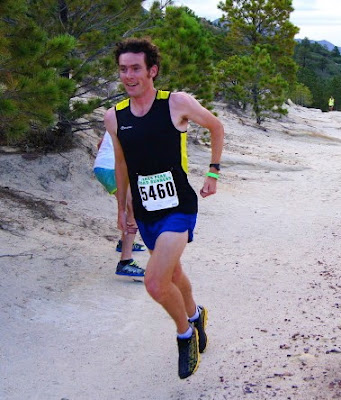 Here's the replay in instagram. This unidentified spectator might be the recently groomed sasquatch that is occasionally seen on the top of Pikes Peak. 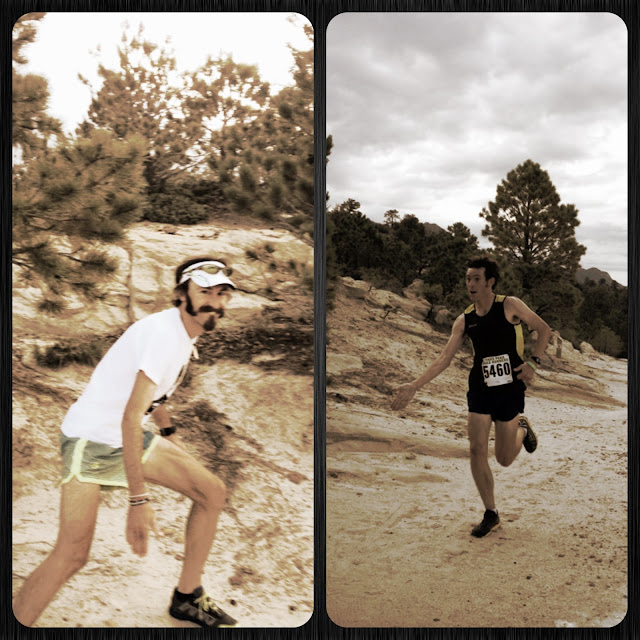 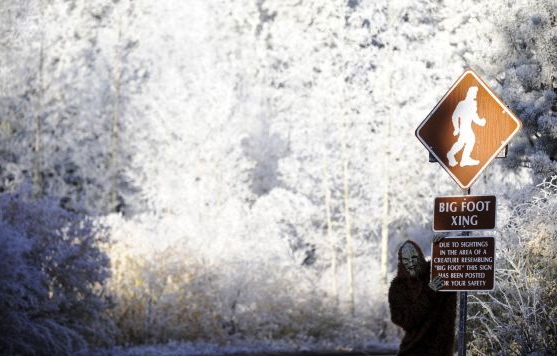 
We don't have photographic evidence, but we believe Justin took a Puebloan West Shower after the race as he has done in years past. "It's the only way to get truly clean," he lamented.

Video of the start

Also at the American Discovery Trail Races, Simon "Gute" Gutierrez was part of the winning coed marathon relay team, Bubba's Run Team, in 2:56:32, which not doubt included Bubba.
Posted by Peter at 6:47 PM