Team Colorado’s movin’ on up…and down!

A preview to the 2013 Pikes Peak Ascent and Marathon

Team Colorado is thrilled to announce that we are about to get MUCH prettier! Now we know that with the good looks of The Fonz (a.k.a. Sage), the blonde flowing locks of Axel, the perfectly coiffed handlebar moustache donning the pretty face of The Prez and newest cover boy, Big McD (to name a few) that this may seem impossible. We thought so too. But thankfully, we have found a compliment of LADIES who share the love of mountain running with great friends and also happen to be quite good at it. The full team will be introduced in the coming weeks but we will highlight three lean, mean, mountain-running machines that have been focusing their sights on the 2013 Pikes Peak Ascent and Marathon. Ok, they are all really quite nice but finding a word to rhyme with lean is harder than it sounds.

Pikes Peak Ascent – August 17, 2013
Dubbed by Trail Runner Magazine as the “Queen of Uphill”, Kim Dobson will make her Team Colorado debut and fifth appearance at the Pikes Peak Ascent after her record-setting win last year in a time of 2:24:58.  TC’s chef d'équipe, Amy Perez had the opportunity to chase (rather unsuccessfully) Kim around some 14ers this summer and spent some time talking (on the downhill) about why she loves this race so much as well as her expectations for this year. Kim says: “I keep coming back to the Ascent because it embodies everything I love about running – lots of uphill, high altitude and great people! It’s become a yearly tradition that my husband, Corey, and I cannot resist. This year, my training has been very untraditional as I worked through an injury. I had a great running base through May, but since then I have had to find alternative ways of staying fit while I let my leg heal. My goal is to run a smart, strong and mentally positive race. We’ll see where I land!”

Kim says her favorite part of the Ascent is the second half. She says “unlike most people, I really enjoy the steep and rocky trail between Barr Camp and A-Frame. The lack of oxygen makes the final three miles EXTRA FUN!” Well Kim, no doubt you are in the minority here. Her least favorite part of the race is the start line to the roundabout (that’s roughly 0.5 miles total…not bad for a 13.32 mile race)…”why must people run that section of the race like it’s a 10K road race?!” We don’t know, Kim….slow down Gute! 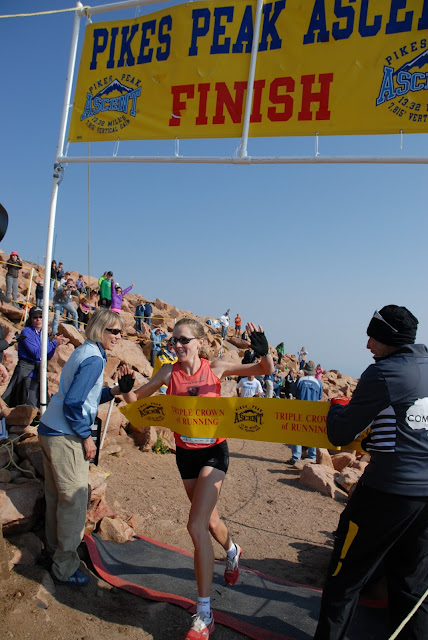 No stranger to the Ascent, Lisa Goldsmith will also make her debut with Team Colorado next Saturday for her 11th visit to the 14, 115 ft. summit of Pikes Peak. Amy chatted with Lisa a bit and asked her why, oh why she would want to put herself through that much suffering year after year, her answer, much like Kim’s, had more to do with the LOVE of the race than the miles or finishing times.  Lisa says: “There seems to be an irrational magnetic attraction between me and Pikes, and besides I am ‘IN’** for life, so why not?!  The fact that it is entirely uphill is my most favorite feature of this race.  My favorite stretch of the course is the traverse between 2 and 1 to go; it is “practically flat” – I remember last year having a VERY difficult time above tree line, and during this stretch I thought I could hear the announcer saying the first woman was nearing the line…my watch was reading 2:20+, and I got a huge smile on my face knowing Kim had CRUSHED the record…and yep, it took me another 40 minutes after her to get there myself. Rough day for me. Again, with ½ mile to go I heard she ran 2:25 from Scott E. and started laughing with OHMYGOODNESS and managed another big smile! The final 200 meters are also a classic fun spot with everyone cheering and feeling the finish line.”

Lisa shares Kim’s dislike of the fast start, says she is NOT a fast starter. 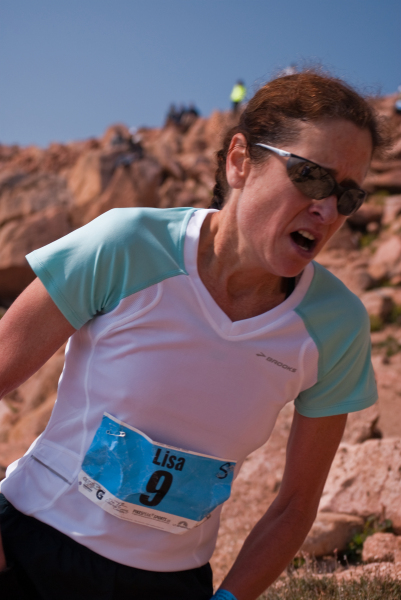 Pikes Peak Marathon – August 18, 2013
Team Colorado is anxiously anticipating the return of Michele Yates to the Pikes Peak Marathon to take care of some “unfinished business”. Michele will begin her second round trip visit to the mountain in the attempt to shave a little time off of her smokin’ fast, 4th place finish at last year’s marathon with a time of 4:42:38. Amy caught up with Michele and asked her to share some thoughts about what she is looking forward to this year and how it differs from this time last year. She says:  “Last year my hubby and I bought our first home and relocated. With that I decided 2 hour was too far to drive to see the chiropractor/sports medicine doctor so found another closer to our new home. Bad decision. I was suffering from nauseating back pain for several months last year (through the PPM) only to realize that the new doctor was actually causing the pain to get worse. With the help of a new, great doctor I’m happy to say the problem is solved.  I wish I could say I am 100% healthy, but I can’t.  I have been able to complete my workouts at 100% but there is still some lagging IT-Band problems that make me wish I had a few more weeks. I am still confident and know I can race well.” 2013 may not be the tip-top, pain-free year that Michele would like but she does feel she is capable of a course record*** in the marathon, go for it Michele…beers on us!

Michele says her favorite part of the course is the downhill. “It’s my strength. Because of the back issues last year, I literally had to walk most the uphill, so this year I will be looking forward to a strong uphill and EVEN STRONGER downhill…” 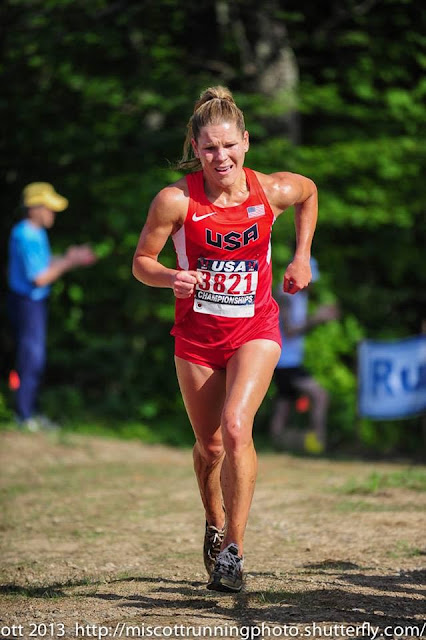 Good luck ladies and welcome to the team!

----to be continued…up next:  Gute’s got wings, Cricket the dog predicts big McD’s maiden voyage time and Pedro and Axel putting on their big boy pants for the marathon.

**Prior winners have lifetime invitations to run, Lisa has won twice.
*** Female course record for the Pikes Peak Marathon is 4:15:18 set in 1981 by Lnn Bjorklund