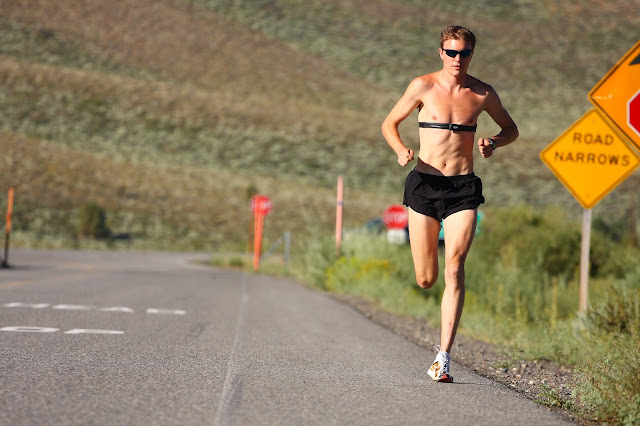 Age: 31 (Currently; it changes every year)

Hometown:  Hillsboro, OR  (it’s really not hilly in town, just out of town where I grew up)

Sponsors:  None currently (yikes, what am I thinking!)

Favorite trails:  Most of the trails off of Highline Drive… they’re nice and wooded, rolling, and make for some great descents.

Favorite workout:  Of all time…it was running tempos @ Sauvie’s Island (Portland, OR).  It’s secluded, peaceful, with lot so wildlife and no hills so you can cruise.

Favorite races:  The NACAC mountain championships.  It was funny how everyone was braking on the downhill sections… it’s like they didn’t grow-up in a hilly area or something.

Website/Blog:  I don’t really have one; woe is me.

Favorite beer: Unlike Neil, I love wheat beer.  I love a good amber ale…. Anything that's not hoppy and I’m happy.

The craziest thing that ever happened on a run occurred just before my 18th birthday.  I was running a 5k loop in the forest with some friends out in Oregon near where I grew-up.  So halfway through the course you have to cross what normally is a pretty small creek.  On this day it was a roaring river due to all of the rain we’d been getting recently (coincidently, that’s why I moved… the rain and gloom had been getting me down for years).  There were two logs situated close together, one higher than the other that spanned the torrent.  So, we did what most high-school aged guys would do, we decided to use them to get across.  Halfway along the logs we stopped and sat down to admire the sheer power of the mighty water.

Satisfied, we got up and started again for the other shore.  Then it happened.  My foot slipped off.  Mind you, this is Oregon. With the constant rains everything gets covered by moss & lichen & algae.  A slick substance coated the logs we were using.  As my feet slipped into the water I grasped wildly at the logs too hold me there, but wiry arms were not strong enough to hold me as my hands slid across the slimy moss covered surface of the tree.  I remember being told once that just 6 inches of water can knock you off your feet if it’s going fast enough.  Well, this water was definitely fast enough and it was carrying me downstream to a waterfall not 20 feet away.

Oh, did I forget to tell you about that?  My mistake.  Those logs we’d been sitting on were 20 feet from the edge of a 25 foot tall waterfall with massive amounts of water cascading over in obedience to the law of gravity.  Now that your mental picture is more complete, remember that I am in the torrent of water, headed for the edge.  I tried frantically to stop myself, trying to grab rocks with my hands or wedge a foot against something to stop my progress.  I remember thinking “I hope this is a dream!”  As I approached the precipice, I knew I would go over.

I read an article years after all this had happened regarding one’s perception of time during traumatic event.  Most people feel like time slows down.  The author had interviewed subject who had gone through traumatic events who had vivid, detailed memories of the ordeal. Scientific research had shown that people’s brains recorded a great deal more information surrounding the event than is common in daily activities.  Information from your senses and thoughts typically starts in short-term memory then a majority of it gets dumped and we forget it.  Very little information is stored away in our long-term memory.  In a traumatic event your brain is flooded with chemicals that enable you to remember “more" than you might normally.  Plus, traumatic events have originality going for them.  You remember things that are unique and new to you more readily.  That’s why you can remember more novel childhood experiences, but you “remember” less from each year because typically less of life is new and unique the older you get.

So, as I fell those 25 some-odd feet down to the ground below, I remember exactly what I though.  First I thought: “I am going to break my legs and never run again.”  I then felt that I was being selfish.  My second thought was: “What if I die?  My parents will be so sad.”  After that I don’t know how long it took me to realize the fall had ended.  Instead of moving with the water, as I had been all along, it now hit me with force, pushing me down.  I sat in the shallow water under the falls, maybe 10 inches deep.  I wondered if I could stand, or if I’d be able to walk, so I tried to get up.

I was able to stand!  Okay.  Well, maybe my legs weren’t broken.  Maybe I could walk then too!  I walked slowly out from under the falls to a boulder 10 feet away from the water and sat down on top of it.  I couldn’t believe what had happened.  I probably looked to see if there were any bones sticking out.  I can’t remember.  I probably was in shock: The water was around 40 degrees and I was wearing a long sleeve, polyester Nike running shirt and running shorts.  Plus, I have never had much fat to insulate me.

What I do remember was Sean, one of the guys on the run with me, yelling, no, screaming at the top of his lungs to see if I was alive.  He’d somehow gotten around the falls and was crazily looking for me in the water.  I just gave a half wave as I felt exhausted and managed to say “I’m over here” likely not much louder than a whisper.  He ran over half relieved, half still horrified at what had just happened.  Soon after, Brian, my other friend on the run that morning joined us.  Brian took my shirt off and gave me his dry one.

The last think I remember that happened was Sean saying “Man, God must want you alive for something.”  Those words have stuck with me.  I left those falls with no more than a scratch on my right hip and a bruised tailbone (what a pain in the butt).  Sean told me later that day that just for fun him and some of his friends had cleared out all of the boulders from under the falls the summer before.  I fell in such a way that my feet were first and my head was last.  With all that happened it’s hard for me not to believe that God protected me that day.
Posted by Peter at 4:48 PM