Team Colorado's Alex Nichols placed an impressive 5th overall at the chaotic ultra race, The North Face Endurance Challenge 50 Mile which took place on December 1st in San Francisco, CA. We were able to get a few words in with him around all his other publicity and interview since the race.

Team Colorado: Nice race out there in San Francisco! 5th place among some of the finest ultra runners in the country, were you expecting that? Give us the lowdown!

Honestly I thought I would place better. I'm not disappointed in 5th but I was kind of shocked by how fast everyone was on that day. It's good though. I think ultra running is getting faster and I'm happy to be a part of that.

TC: So, in 2011, you were leading TNF 50 and the next thing you knew is that you were laying on the ground with what you thought might have been a broken ankle. What happened? How many 50 milers have you run?

In terms of ultras I've only ever run the North Face 50. Last year was a huge disappointment because my training leading up to the race was perfect. I spent the first half of that race just sitting behind people and waiting to make my move. When I did I was shocked by how easily I was running, but soon enough gravity caught up with me and my ankle imploded. This year I had 6 weeks of running before the race but managed to finish in a good spot. In some ways 2012 was kind of the opposite of 2011.

TC: Back in August you place 2nd at the Pikes Peak Marathon, in front of World Mountain Running Champion Max King and probably one of the most versatile trail, mountain, ultra, cross country, track, etc. runners out there, and even gave Killian Jornet a run for his Euros. That was when your name got out there and all the running groupies wanted your autograph. Were you expecting the same thing at TNF 50--with the running, that is, not the groupies?

I think what I've learned about this year is that I need a blog. Everyone has a blog, and without one my groupies are lost. Or maybe I should get into twitter, then I could let hoards of fans know what I'm doing at all times. But then again my groupies may be disappointed to find out what I do on a daily basis. There's only so many times that reading about an 11 mile mesa loop in the morning can be interesting. I'll work on it though, maybe then people will let me line up at the front of the start line.

TC: You have also been successful at the shorter distances and on the oval. What was your preparation leading up to TNF 50?

I definitively don't consider myself an ultra runner. But I have always done a fair amount of mileage  and some pretty solid long runs. I think that the volume over the years, and being very comfortable on 20+ mile runs has allowed me to run a range of distances pretty successfully. I try to alter my training to better suit my next race but my weeks are generally structured the same year round (as long as I'm not injured. Something that seems to happen way too often). For north face I got my long run up to 40 miles but kept the rest of the week pretty normal.

TC: We witnessed the sloppy wetness which was TNF50. How bad was it?

It was pretty bad, but not horrible. My main issue was the visibility for the first 9 miles. I think the 5 AM start is a little too early. When you combine the darkness with sideways rain from the ocean it makes things pretty tough. I remember staring directly in front of my feet for at least the first hour and a half. After that there was a lot of mud and a lot of people to pass but I had enough other stuff on my mind that it didn't frustrate me too much.

TC: A lot of the men's elite field who went off course tried to make up by adding in the missed loops later in the race. Is this true? Who were they? Did you go off course? What the course difficult to follow? Was it as chaotic as it was for us watching the live stream of the race? (Sorry, that is a damn well loaded set of questions, you don't have to answer all of them or feel free to rant and accuse if you would like).

I'm still not exactly sure what happened in the lead pack. They were so far in front of me in the first half it seemed like they were in a different race! The day before I had requested that my crew tell me how far back I was from the leader at the aid stations, but when I failed to get any sort of update from  my Dad and my girlfriend Maddy I just assumed that I was so far back they didn't want to tell me. Turns out they had no idea of who the actual leader was or how far in front of me he was.

Looking back at it now I think my conservative start benefited me in several ways. Since I wasn't worried about where the leader was I was able to stop and find out where the course went at several key intersections. I still went out and back in a couple of spots, adding on some extra distance, but every time I was confused I was able to talk to someone or I would just take a moment to think and get back on track. I've been in more than one race where I was too focused on racing and went off course simply because I was so focused on the guy next to me. And of course by going out at my own pace I didn't slow down nearly as much as the rest of the field. It was pretty chaotic overall but I just stayed in my own little world and things worked themselves out around me.

TC: How many marriage proposals have you had since the race? Lots I bet!

It's true actually. I keep getting weird emails and calls from Peter Maksimow. I wouldn't mind so much but lately his beard has started to creep me out. I heard he keeps pens in there for storage.

TC: Who??? Never heard of him, but I have heard of the epic beard you speak of. Thanks, Alex!


Here is the data from Alex's Garmin: 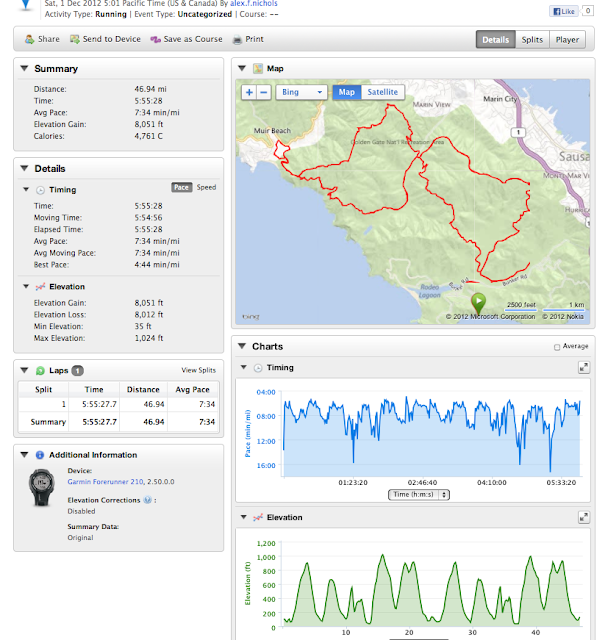